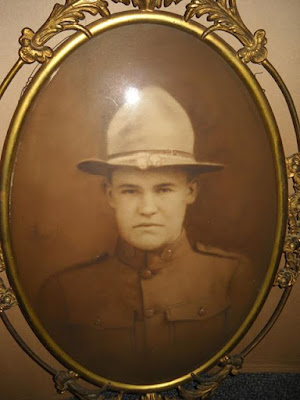 PFC Robert Anderson Smith was born 5 Jan 1896 in Halifax County, Virginia the eldest of 3 children of James Henry and Josephine Rose (Strange) Smith. His father farmed but died in 1903. His mother remarried but was soon widowed again.  In 1910, at age 14, Robert helped support the family by working as a messenger.

After entering the Army, Robert was assigned to G Company 116th Infantry. On 15 Jun 1918, he and his unit left Hoboken, New Jersey aboard the USS Finland bound for France.  PFC Smith was killed in action on 23 Oct 1918.

PFC Smith was buried in the Meuse-Argonne American Cemetery.  In 1930, his mother made the pilgrimage to France to visit his grave.