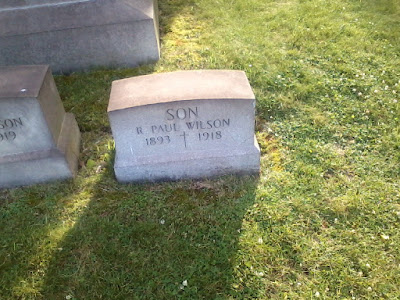 PFC Robert Paul Wilson was born 17 Dec 1893 in Pittsburgh, Pennsylvania, the 9th of 11 children born to John and Mary A. (Kane) Wilson. His father was born in County Tipperary, Ireland and his mother was a native of Wales.  His father worked as a hotel keeper and must have been successful because in 1910 he is shown not as having a job but being supported by his "own income".  At least 2 of Robert's brothers went to college.  On his 1917 draft registration, Robert said that his employer was Jiles P. Corry Company in the Jones Law Building where he worked as a clerk.

After entering the Army, Robert was assigned to I Company 116th Infantry.  PFC Wilson was killed in action on 15 Oct 1918.

Brother, Ralph Hyle Wilson, served in the United States Marine Corps aboard the USS Pennsylvania in World War One.
Posted by Hobie at 6:19 PM