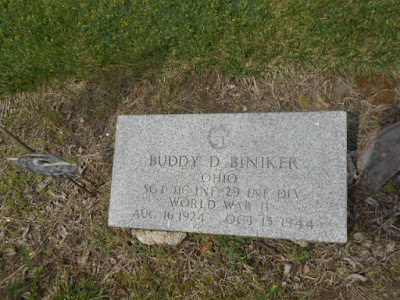 SGT Buddy Donald Biniker, son of Richard Franklin and Verea Belle (Kopp) Biniker was born in Woodville, Ohio on 16 Aug 1924.  Donald was the 2nd of the couple's 4 children but his older brother died at age 17 in 1940.  His father worked for the telephone company.

When Buddy was drafted in February 1943 he was single and had only a grammar school education. He was assigned overseas to B Company 116th Infantry sometime before D-Day.  On 13 Sep 1944 he was promoted to SGT from PFC.  On 15 Oct 1944 SGT Biniker was killed in action.

Buddy's remaining family survived him and he is buried in Clay Township Cemetery in Genoa, Ohio.
Posted by Hobie at 5:21 AM