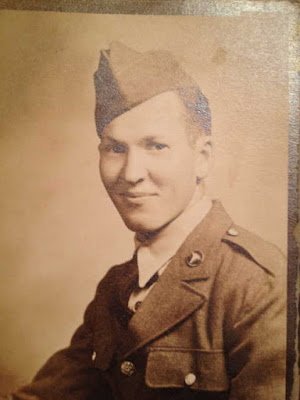 T5 William Howard Campbell was born 30 Nov 1917 in Lansing, Ohio to John Joseph and Alice Ida May (Goines) Campbell.  William's father was a machinist and a car inspector for a railroad.  In 1940 the family was living in McAllen, Texas and William was working as a sales clerk in a grocery and had a 1939 income of $600.

William entered the service in April 1942.  After training as a medic he was sent overseas.  Sometime prior to the D-Day landings he was assigned to Medical Detachment 116th Infantry and attached to C Company 116th Infantry. While in England he apparently met and married a Miss Larman and they had one daughter.


Pfc. Cecil F. Randolph was hit in the leg by a machine gun bullet and went down in the water. Later a medic returned and pulled him up under a tank. The medic, T/5 William H. Campbell, was under fire during this act and was later awarded a silver star for his bravery.


He was wounded on 1 Jul 1944 and evacuated to the hospital.  He must have been returned to duty with Headquarters 29th Infantry Division because on 7 Aug 1944 he was transferred from there back to the Medical Detachment. On 18 Aug 1944 William was promoted to T5.  T5 Campbell was killed in action on 13 Oct 1944.

T5 Campbell was repatriated in 1948 and buried in Laurel Cemetery in Mission, Texas.  His wife remarried.
Posted by Hobie at 8:32 PM