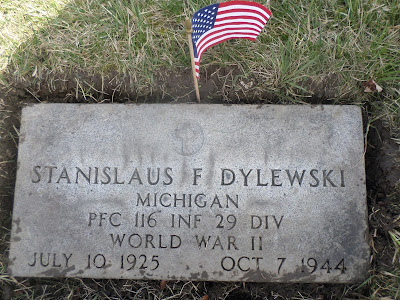 PFC Stanislaus F. Dylewski was born 10 Jul 1925 in Detroit, Michigan first child of Franciszek and Anna R (Kubicz) Dylewski.  Both parents were Polish immigrants. "Frank", his dad, worked in an auto plant as an assembler and had served in the army during WWI. The family lost their second child, Leonard Paul Dylewski, when he was only 2 in 1930.

Stanislaus entered the service in November 1943.  Sent overseas, he was assigned to L Company 116th Infantry from the replacement depot on 25 Jun 1944.  PVT Dylewski was promoted to PFC on 26 Jul 1944.  He was killed in action on 7 Oct 1944.  The unit would have been in the vicinity of Aachen, Germany at that time.

PFC Dylewski was repatriated in 1947 and now rests forever in Mount Olivet Cemetery in Detroit, Michigan.
Posted by Hobie at 11:50 AM