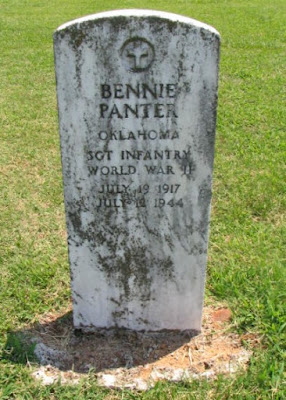 SGT Benjamin Franklin "Bennie" Panter was born 19 Jul 1917 in Stilwell, Oklahoma. He was the 2nd of 6 children born to Thomas P. and Drusilla Ellie (Cragg) Panter. As members of the Cherokee tribe, family had been forcibly removed from Georgia on the Trail of Tears. His father farmed, at first for others and then near Stilwell. He was apparently called Bennie all his life to distinguish him from his uncle for whom he had been named. Bennie only completed one year of high school.

Bennie was drafted in April 1942. After his basic military training he was sent to England and assigned to H Company 116th Infantry. PFC Panter participated in the D-Day landing at Omaha Beach on 6 Jun 1944. He was promoted to SGT on 20 Jun 1944. SGT Panter was killed in action on 13 Jul 1944.

Initially buried in the Henri-Chappelle Cemetery, Bennie was repatriated in 1948 and re-interred in the Stilwell Cemetery in Stilwell, Oklahoma.

Bennie's great-grandfather, James Warren Adair, served as a CPL in the Chickasaw Rifles (CSA) during the Civil War.
Posted by Hobie at 9:28 AM