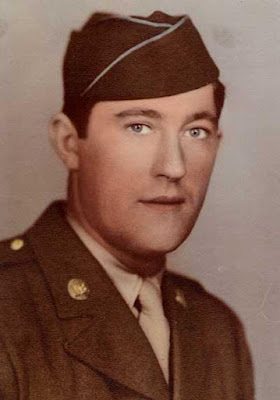 PFC Gerald J Becker was born 8 Jun 1916 in Buffalo, New York to John A and Clara B (Fredericks) Becker.  His father worked in a foundry to support his wife and 4 children.  Gerald worked as a truck driver in 1940.

On 17 May 1941 Gerald married Irene M Terhaar also of Buffalo.  They had 2 daughters the youngest of whom was Jean Catherine Becker who became Sister Mary Pauline of the Sisters of Saint Francis. Her older sister survives and she had 4 children (Gerald's grandchildren).

Gerald is buried in Mount Calvary Cemetery in Cheektowaga, New York.
Posted by Hobie at 6:52 AM