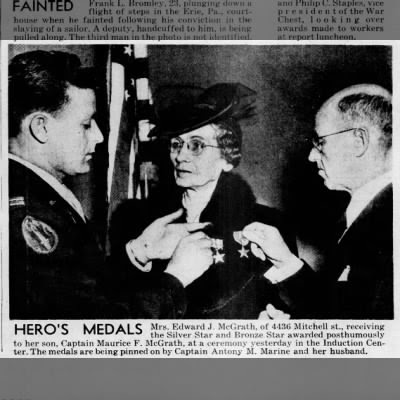 CPT Maurice Francis McGrath was born 2 Aug 1918 in Philadelphia, Pennsylvania. He was the 3rd of 4 children born to Thomas Edward Joseph and Sara Teresa (Wilhere) McGrath. His father worked as an electrical inspector and as a foreman for the Philadelphia Transit Authority. He reported a 1939 income of $2500 and they owned their home valued at $4000. In short, a financially successful family in the midst of the Great Depression. Maurice attended St. John's High School and LaSalle College (class of 1939). He was a student at Temple University Law School when he entered the Army.

Maurice entered Army service August 1941. After completing training including Officer training he was sent overseas and assigned to Service Company 116th Infantry. He was with that unit serving as regimental transportation officer for the D-Day landing on 6 Jun 1944. On 15 Jun 1944 he assumed command of Service Company. On 13 Jul 1944 he was transferred to I Company 116th Infantry to serve as the company commander.

1LT McGrath provided a 2-page account of his activities on 6 Jun 1944 to LTC S. L. A. Marshall. He was first wounded in the abdomen on 15 Jul 1944 and he was in England recovering for more than a month not returning to the regiment until 28 Aug 1944 when he was transferred from the replacement depot to L Company 116th Infantry to again serve as Company Commander.

A few weeks after D-Day, Maurice penned this poem:

My brain is wracked, my spirit bent
I don't know where to turn
My scheme of life is all upset, rent,
Warped, distorted, left to burn,
Upon the shores of life's angry ocean.

Tossed into this new world reign
Of Terror,lonliness and greed that is blind
I wander aimlessly seeking in vain
Something to grasp; to hold; to find
A haven, a refuge free from commotion.

Oh confusion! A world upturned
From the civilized to the jungle land
You sent me searching far and I returned
With God - who has given me a guiding hand
In whom I found solace, comfort, and devotion.


CPT McGrath's L Company kicked off an attack on Baesweiler, Germany on 7 Oct 1944. After some initial resistance the Germans abandoned the town and CPT McGrath gathered L Company soldiers and directed them into the town. While accompanying his soldiers CPT McGrath was wounded and died soon after of his wound(s) on 7 Oct 1944.

CPT McGrath would be awarded the Bronze Star awarded for actions on D-Day and a Silver Star for gallantry in attack on Brest. He was repatriated in 1947 and re-interred in Westminster Cemetery in Bala Cynwyd, Pennsylvania.

His older brother, Edward, also served as an officer and when they met in France, after D-Day, was serving as a 1LT in the Anti-Aircraft battalion of the 101st Airborne Division.
Posted by Hobie at 12:29 PM