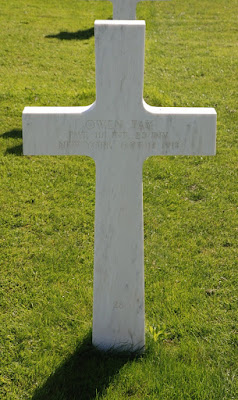 PVT Owen Fay was born 1 Apr 1890 in Drumbin, County Monaghan, Ireland to Helen Fay. Owen immigrated in April 1914.  He was working as a porter when he registered for the draft.  PVT Fay was assigned to F Company 116th Infantry when he was killed in action on 12 Oct 1918.

PVT Fay is buried in the Meuse-Argonne American Cemetery.  His mother was still living in Drumbin when she was notified of his death.
Posted by Hobie at 12:23 PM