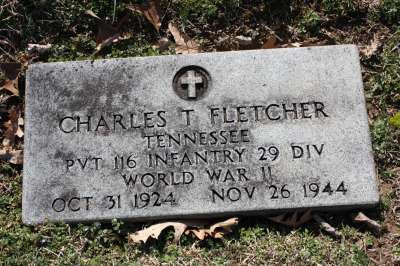 Charles was drafted in June 1943.  After training he was sent overseas and was assigned to H Company 116th Infantry in time to participate with that unit in the D-Day amphibious assault in which he was seriously wounded and evacuated to hospital. On 5 Aug 1944 he was transferred from the replacement depot back to H Company.  On 11 Aug 1944 he is recorded on the morning report as being promoted to PFC. On 26 Nov 1944 PFC Fletcher was killed in action.

A note on Charles' rank.  As mentioned above the morning report notes his promotion.  The headstone application was completed using the rank PFC which was crossed out and "corrected" to PVT and as you can see that is what is on the headstone.  I believe this is another one of those errors that seems to have commonly occurred where the personnel action was taken but for some reason the paperwork wasn't preserved/forwarded/recorded at higher headquarters or in personnel records.  We are certain that Charles thought he was a PFC at the time he was killed.