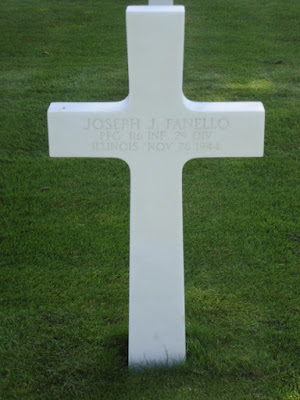 PFC Joseph J Fanello was born in Chicago, Illinois on 28 May 1911 to Nicola and Rosina (Dispenza) Fanello.  Nicola was born in San Nicola-Dacrissa, Italy and Rosina was born in Palermo, Italy.  Nicola worked on the railroad to support his family of 6.  Later he owned and operated his own grocery.  In 1940 Joseph was working for the railroad.

Joseph was drafted in May 1942.  At some point in time he was assigned to Headquarters 3rd Battalion 116th Infantry, probably before the D-Day landings. PFC Fanello served with the unit until 26 Nov 1944 when he was killed in action.

PFC Fanello is buried in the Netherlands American Cemetery.
Posted by Hobie at 12:02 PM