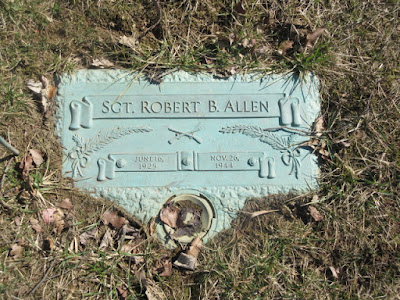 PVT Robert Brant Allen was born 16 Jun 1925 in Johnstown, Pennsylvania to Roy M. and Gladys J. (Brant) Allen.  His parents divorced early in his life and he and his sister and mother lived with his maternal grandparents. Robert was living in Shanksville, Pennsylvania when he registered for the draft in 1943.

PVT Allen was repatriated, probably in 1948, and is buried in Somerset County Memorial Park in Somerset, Pennsylvania.

We have to note that while the grave marker indicates his rank as SGT (Sergeant) there is no record of him ever being promoted to that rank.  All the documents we can find note his rank as PVT (Private).
Posted by Hobie at 7:33 PM