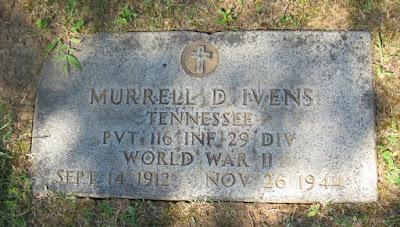 PVT Murrell D. Ivens was born 14 Sep 1912 in Madisonville, Tennessee second of four sons of Charles Henry and Beuna M. (White) Ivens.  His father worked as a carpenter and mechanic. Beuna died in 1919 of septic peritonitis. His father re-married. Charles died in 1932 of unknown cause, he was found dead in the street. In 1930, Murrell was working for Knox Glove Company in Knoxville, Tennessee.  On 24 Mar 1934 he married Eloise Jane Newman.

Murrell was drafted in June 1943.  After basic training he was sent to Europe and on 24 Oct 1944 was transferred from the replacement depot to F Company 116th Infantry.  PVT Ivens was killed in action on 26 Nov 1944.

PVT Ivens was repatriated in 1949 and is buried in the Lynnhurst Cemetery in Knoxville, Tennessee. Brother Ray also served in the Army during the war.