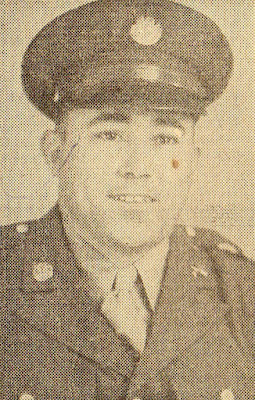 PFC Floyd Franklin Skinner was born 11 Sep 1909 in Spotsylvania County, Virginia. he was the 2nd of the 6 children born to Enoch Dennis and Nellie Jane (Hughlett) Skinner. His father worked as a carpenter and his mother as a postmistress and storekeeper. The family lived in Fredericksburg before moving to Courtland. Floyd married Clara May Berry and the couple had a daughter on 2 Oct 1931. She had an irreparable congenital defect and died just 7 days later. Floyd and Clara would not have any more children. The couple bought a home at 1207 Dixon Street in Fredericksburg, Virginia. In 1940 they were both working, Clara as a machine operator in a clothing factory and Floyd was working for Sylvania Industrial Corporation. They reported 1939 incomes of $672 and $884 respectively.

After Floyd was drafted, probably in late 1943, he was eventually sent to the European theater. PVT Skinner was transferred to H Company 116th Infantry on 21 Jul 1944 to serve as a heavy machinegunner. He fought with the unit at Vire, Brest and into Germany. Promoted to PFC on 11 Aug 1944, following the liberation of Vire, he was killed in action in the attack on Koslar, Germany on 26 Nov 1944.

PFC Skinner was repatriated in 1949 and re-interred in Oak Hill Cemetery in Fredericksburg, Virginia.