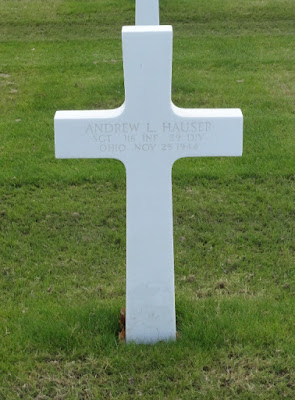 SGT Andrew L. Hauser was born in Cincinnati, Ohio 13 Dec 1917 the only child of Andrew and Marie (Glunz) Hauser.  His father was a native of Wurttemberg, Germany, a bookbinder and died in 1925. His mother was born in Baden, Germany.  After his father's death his mother took in lodgers to make ends meet.  Andrew managed to attend 2 years of college, worked as a clerk at Lunkenheimer Valve Company and married.

SGT Hauser is buried in the Netherlands American Cemetery.
Posted by Hobie at 5:07 PM