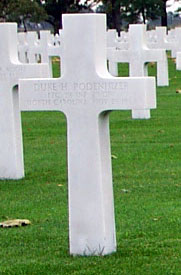 PFC Duke Hopper Rodenhizer Jr. was born 20 Nov 1917 in Leaksville, North Carolina. He was the youngest of the 4 children born to Duke Hopper and Carolyn Emma (Hamlin) Rodenhizer. His father worked as a farm hand but died in August 1919 of tuberculosis at the age of 35. The younger Duke was not quite 2 years old. His mother told the census taker in 1920 that she had no employment. His mother never re-married and the children went to work to support the family. In 1940 Duke was working as a gas station attendant at Vernon's Service Station and his older brother Millard was working in a furniture plant and they reported 1939 incomes of $450 and $750 respectively. The sons lived with their mother on Claybrook Street in Stoneville, North Carolina in a home they owned valued at $800 in 1940.