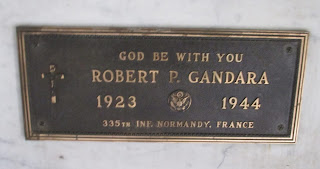 PFC Robert P. Gandara was born 20 Jul 1923 in Los Angeles, California to Pedro Mendez and Carmen (Zamora) Gandara.  Both parents were born in Mexico.  His father was working as a stone grinder in 1940 with a reported 1939 income of $102.

After entering the service, Robert was sent to Europe and was transferred from the replacement depot to F Company 116th Infantry on 19 Jun 1944. He was killed in action with that unit on 27 Jun 1944.

PFC Gandara was repatriated and is buried in Cavalry Cemetery, in Los Angeles, California.

We do not know the details of his military service.  He may have served with the 335th before or during his overseas deployment.
Posted by Hobie at 11:03 AM