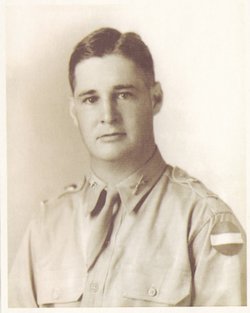 1LT Wallace Whitfield Riddick Jr was born 6 Jan1919 in Raleigh, North Carolina. He was the eldest of the 3 children born to Wallace Whitfield and Ella Livingstone (Haynesworth) Riddick. The elder Wallace was a civil engineer and the family lived in Greenville, South Carolina then Demopolis, Alabama where his father bought a home at 503 Pettus Street valued at $5000 in 1940. Wallace attended North Carolina State College where he was a member of the Kappa Alpha fraternity and studied textile manufacturing as well as participating in 4-years of ROTC. He then went to work for High Point Weaving in High Point, North Carolina.

Wallace was commissioned as a 2LT in the U.S. Army Reserve upon graduation and was still serving when called to active duty in January 1942. He was stationed at Fort Benning, Georgia, Fort Sill, Oklahoma and Camp Bowie, Texas before being sent to England in March 1944. It was while he was stationed at Fort Sill that he married May Vestal Leonard on 14 Jul 1943. He remained was to remain in England until sent to the replacement depot on 13 Jun 1944. From there he was sent to D Company 116th Infantry to serve as a platoon leader on 16 Jun 1944. 1LT Riddick served in combat with that unit through the fighting at Saint Lo and Vire. He once experience a close call when 7 sub-machine gun bullets reportedly struck and penetrated his helmet without touching him. 1LT Riddick continued to lead his platoon until killed in action in the attack on Brest on 1 Sep 1944.

In an article published about Wallace in the Demopolis Times after his death the author said of him "Could there be a better Heaven than to be alive in the hearts of those who love us when we ourselves have made their number great?"

Wallace and May had no children. May remarried in 1946. Wallace's brother, Harry Haynesworth Riddick, served in the U.S. Army during the war also as a commissioned officer.
Posted by Hobie at 4:26 AM