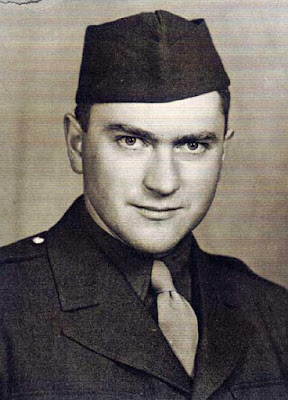 PVT Albert Alfred Hermand Vincent was born 8 Jun 1914 to business man Joseph Louis Sebin and Albertine (Gardner) Vincent.  His father was a businessman who worked for and then headed the Vincent Bottling Company of Auburn and Lewiston, Maine a company which Albert's grandfather Sabin Vincent had helped start. The Vincent Company closed in 1962 or 1963.  Prior to the war, Albert worked as advertising manager.  On 26 Apr 1939 he married Aurore Cecile Daigle of Auburn.

After the war, Albert's body was repatriated and he was buried in Saint Peter's Cemetery in Lewiston, Maine.


Aurore never remarried and raised her girls and made a living operating Vincent Gift Shop.  She died in 2005 and is buried with her husband.
Posted by Hobie at 6:03 PM