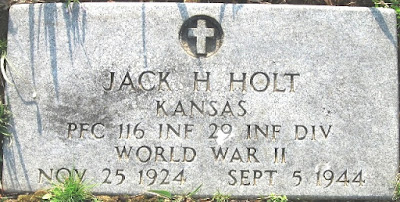 PFC Jack H. Holt was born 25 Nov 1924 in Coffeyville, Kansas the only surviving son of 7 children of James Hobart and Gladys Edith (Wolverton) Holt.  In 1930, Gladys was supporting the family as a bill clerk for a railway shipping company. However, by 1940, James was working as a school custodian and reported a 1939 income of $1200.

Jack entered service in the Army in July 1943.  Trained as a medic and sent to England, Jack was assigned to Medical Detachment 116th Infantry and from there attached to Headquarters 3rd Battalion 116th Infantry to work in the battalion aid station.  After the amphibious assault on D-Day and combat operations through the battle for Saint Lo, Jack was relieved from attachment and returned to the Medical Detachment.  He was himself seriously wounded on 29 Aug 1944 and died of his wound(s) on 5 Sep 1944.

PFC Holt is buried in the Restlawn Memorial Park and Cemetery in Coffeyville, Kansas.
Posted by Hobie at 6:11 AM