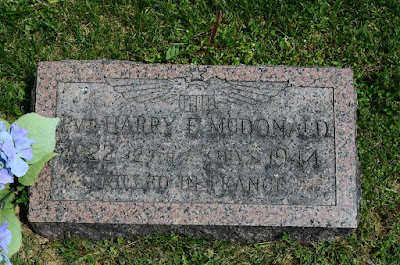 PVT Harry E. McDonald was born 16 Aug 1922 in Washington County, Indiana. He was the 4th of 5 children born to George H. and Eva M. (Duncan) McDonald. His father worked in a wall paper factory. Older brother John died of cholera in 1920 at age 13 months. Harry never made it to high school.

Harry entered the Army in December 1942 and attended training at Fort Belvoir, Virginia; Seattle, Washington; Fort Ord, California; Camp Philips, Kansas; and Fort Meade, Maryland.  He was then sent to England and reportedly assigned to I Company 116th Infantry about 1 Sep 1944. He fought with the unit through to 8 Sep 1944 when he was killed in action.

PVT McDonald was repatriated and re-interred in the Claysville Cemetery in Campbellsburg, Indiana.

Brother, William Edward McDonald, served in the U.S. Army 1943-1945, also in the infantry in the European theater.
Posted by Hobie at 6:15 PM