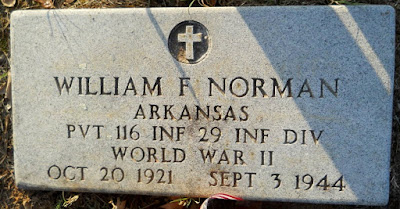 PVT William Franklin Norman was born 20 Oct 1921 probably in either Hempstead or Little River County, Arkansas. He was the 2nd of the 3 children and only son born to Tom Franklin and Ruth Mae (Adkison) Norman. The family farmed and in 1940 were paying $3 a month rent. Living with William and his parents were maternal grandmother, Addie, sister Millie, brother-in-law Edward Adams and nephew LeRoy.

William was drafted in Oct 1942 and eventually sent to the European theater. He may have been assigned to L Company 116th Infantry prior to the D-Day landings at Omaha Beach but might not have been assigned to the unit until 15 Jul 1944. He might have been wounded one time previous to then. However we do know that he was transferred from the replacement depot to L Company and also wounded on the 15th and evacuated to hospital. PVT Norman returned to the regiment on 28 Aug 1944, this time being transferred from the replacement depot to E Company 116th Infantry. This might have been in error because on that same day he was again transferred, this time to C Company 116th Infantry. He would fight with that unit until killed in action on 3 Sep 1944.

PVT Norman was repatriated in 1948 and re-interred in Westmoreland Cemetery in Fulton, Arkansas.