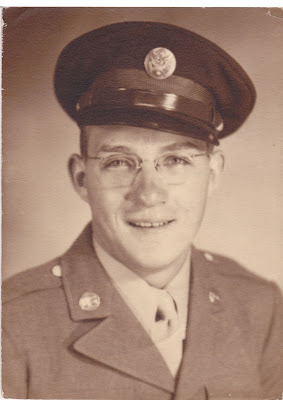 PFC Sylvester John Steinhoff was born 29 Jun 1921 in Bangor, Minnesota. He was the 9th of the 10 children born to Anton Wilhelm and Barbara Mary (Decker). His father was a native of Schapdetten, Germany and supported the family by farming on rented farms, first near Raymond and then near Brooten in Minnesota. Known as "Sally" to friends and family, Sylvester grew up in Padua, Minnesota where he attended public school. In 1942 he was working for brother-in-law, Jacob Essler in Sauke Centre, Minnesota driving a truck but still lived near Brooten on the family farm.

Sylvester was drafted in November 1943, completed his basic military training at Camp Blanding, Florida and was shipped out for the European theater in June 1944. After several weeks in England he was sent to France and transferred from the replacement depot to H Company 116th Infantry on 21 Jul 1944 to serve as a Heavy Machine Gunner. He fought with the unit in the liberation of Vire, France and was with the unit as it began its part in the liberation of Brest, France. PFC Steinhoff was killed in action at Brest on 6 Sep 1944.

PFC Steinhoff rests forever in the Brittany American Cemetery.
Posted by Hobie at 4:16 AM