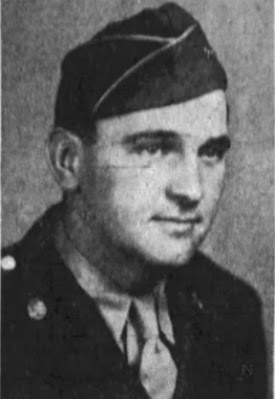 PVT Henry William Szymanski was born 2 Dec 1917 in Buffalo, New York. He was the youngest of the 6 children born to Joseph and Mary (Rutkowski) Szymanski. Henry's mother was a native of Poland. His father worked as a coal miner and did well enough that he bought a house at 422 Gruley Street in Avoca, Pennsylvania which was valued at $2500 in 1930. Henry married Henry Golack on 2 Sep 1939 and  Henry worked forVolhe Coal Company in Pittston,  and A&P stores in Scranton before the couple moved to Waterbury, Connecticut.

Henry was drafted in December 1943. After completing his military training he was sent to the European theater and transferred from the replacement depot to L Company 116th Infantry on 3 Sep 1944 while the unit was still fighting to secure Brest, France. PVT Szymanski was killed in action on 14 Sep 1944.

PVT Szymanski was repatriated in 1948 and re-interred in the Holy Rosary Cemetery in Duryea, Pennsylvania.