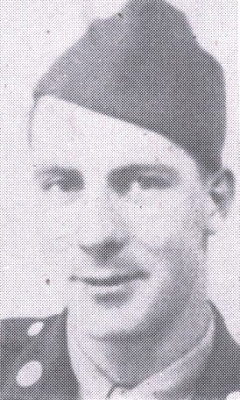 PFC Robert Erwin Rupert was born 12 Sep 1917 in Bloomsburg, Pennsylvania the son of Louisa Lois Terwilliger. It is unknown who his father was or what might have happened to him. His mother re-married in 1919 to Harry Owed Fedder with whom she would have 5 children. Harry was a WW1 veteran who supported his family working for the railroad but left the family by 1940. Robert helped support his family including his maternal grandparents by working as a spinner in a textile mill earning a reported $658 in 1939. Younger, half-brother Bruce also worked in the mill and also reportedly earned $658 for 1939. This income supported the family of 9 living at 472 East 8th Street in Bloomsburg. Robert married Vivian Katherine Gulliver on 30 Nov 1940 and the couple would have a daughter in September 1942 and a son in October 1943.

Robert was drafted soon after his son's birth in November 1943. After taking basic training at Fort McClellan, Alabama he was sent to the European theater in May 1944 first going to England and then to France. He was transferred from the replacement depot to G Company 116th Infantry on 13 Aug 1944. He was promoted to PFC on 18 Aug 1944. He was seriously wounded on 1 Sep 1944 as he fought with his unit in the attack on occupying German forces at Brest, France. He was evacuated to hospital and died of his wound(s) on 4 Sep 1944.