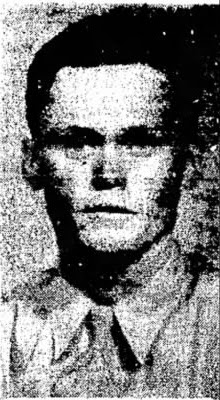 PVT William Bryant Strader was born 2 Feb 1920 in Pittsylvania County, Virginia. He was the 3rd of 9 children born to John Bryant and Jettie Elizabeth (Gammon) Strader. His father supported the family by farming, at first on rented land and later on a farm he owned, near Tunstall, Virginia. William was working on the family farm in 1940 but then went to work for the Riverside Cotton Mill in Danville, Virginia.

William was drafted sometime in 1943 and after his basic military training was sent to the European theater. PVT Strader was transferred from the replacement depot to I Company 116th Infantry on 7 Aug 1944 while the regiment was near Vire, France. He fought with the unit as it moved through Brittany in the effort to liberate Brest and was injured, a non-battle casualty, on 5 Sep 1944, sent to hospital and immediately returned to duty. He was transferred to A Company 116th Infantry the next day and fought with that unit until killed in action in Brest on 15 Sep 1944.

2 of William's great-grandfathers served during the Civil War. It just so happens that they were brothers. Stephen Neal Strader served as a PVT in K Company 13th North Carolina Infantry (CSA) losing the sight in his left eye and being captured and confined at Camp Lookout until the end of the war. Robert B. Strader served as PVT in 18th North Carolina Cavalry. Sister, Bertha Bell Strader, enlisted in the U.S. Air Force in 1956.

Email ThisBlogThis!Share to TwitterShare to FacebookShare to Pinterest
Labels: A Company, BrittanyAmericanCemetery, I Company