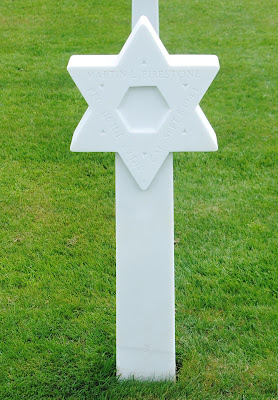 PFC Martin L. Firestone was born in 1921 in Manhattan, New York state to Joseph and Mildred (Black) Firestone.  Martin's parents divorced when he was young and he apparently lived with his father.

After he was drafted he was sent overseas and assigned to L Company 116th Infantry.  He was apparently with the unit on D-Day.  On 24 Aug 1944 he suffered a non-combat related injury and was sent to the hospital and then returned to the unit from the hospital on 28 Aug 1944.  On 6 Sep 1944 he was killed in action.

PFC Firestone is buried in the Brittany American Cemetery.
Posted by Hobie at 12:44 PM