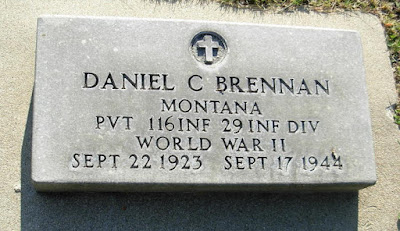 PVT Daniel C Brennan was born 22 Sep 1923 in Butte, Montana the youngest son of Michael Joseph and Anastasia (Jackson) Brennan.  Michael Brennan was a miner and worked in a copper mine.  Older brother Frank contributed to the family by working in a packing house.  Michael died in 1939.