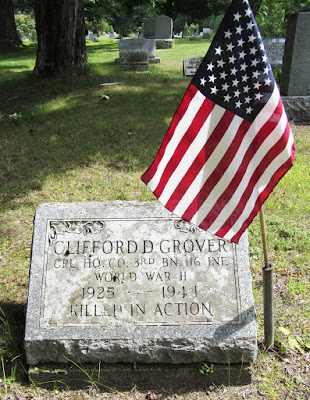 After entering the army in July 1943, Clifford was sent England in December and assigned to Headquarters Company 3rd Battalion 116th Infantry and was with that unit in the amphibious assault of 6 Jun 1944.  It was for his actions in that landing that he received the first Bronze Star. He was awarded the Bronze Star again for action on 17 Jul 1944.


On June 7, 1944, Pfc. Grover distinguished himself in combat by laying and maintaining communication lines between command posts. This work was performed under intense enemy artillery fire and was vital to the establishment of the Normandy beachhead. And for heroic achievement in military operations against the enemy of July 17, 1944,Pfc.Grover's courage and devotion to duty reflect great credit upon himself and the military service.