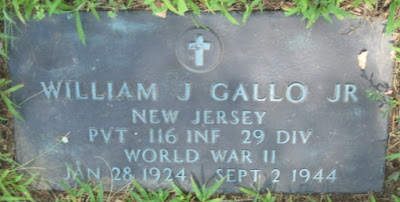 PVT William James Gallo Jr was born 28 Jan 1924 in Haledon, New Jersey to William James and Elizabeth L. Gallo. His father worked as a credit manager for a manufacturer and as a bookkeeper.

William entered the service July 1943.  Sent overseas, William was apparently assigned to Headquarters 116th Infantry prior to the D-Day landing.  He survived that (one of two boats bringing in the Headquarters was sunk and all aboard were killed).  PVT Gallo was killed in action on 2 Sep 1944.

PVT Gallo was repatriated in 1948 and is buried in Laurel Grove Memorial Park in Totowa, New Jersey.
Posted by Hobie at 7:59 AM