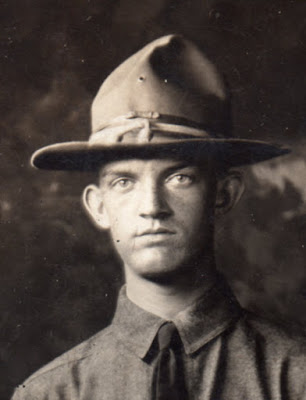 PFC Clarence Vincent Stidham was born 3 May 1899 in Norton, Virginia, the 4th of 6 children of William David and Malissa Victoria (Wright) Stidham.  His father worked as a coal miner and later as a retail merchant in a small store.

After entering the army, Clarence was assigned to K Company 116th Infantry.  He sailed with the regiment to France aboard the USS Finland in mid-June 1918.  After some preliminary training the regiment was moved to the front lines.  PFC Stidham was wounded and died of his wound(s) 17 Oct 1918.

PFC Stidham was repatriated but we don't know where he rests today.