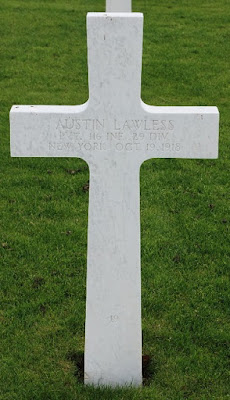 PVT Austin Lawless was born 13 Dec 1887 in Brooklyn, New York to Michael and Elizabeth Lawless. His father was a plumber. The family lived at 98 Junius Street in Brooklyn in 1918.

Email ThisBlogThis!Share to TwitterShare to FacebookShare to Pinterest
Labels: B Company, Meuse-ArgonneCemetery