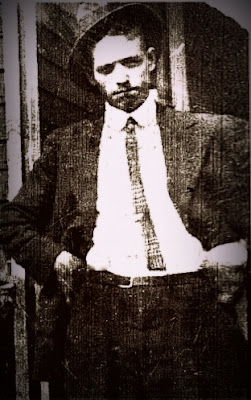 PVT Curtis LeRoy Yeager was born 24 Sep 1896 in Terre Haute, Indiana. He was the youngest of 6 children born to James A. and Barbara Berry (Grindle). His mother had lost 3 previous husbands before she married James Yeager. His father worked as a common laborer and about 1900 he lost his right arm to a minor injury which had caused blood poisoning which required amputation of the arm to save his life.

After entering the Army on 28 Mar 1918 in Terre Haute, Indiana, Curtis was sent to Camp Taylor, Kentucky and was then transferred to Camp Gordon, Georgia. Curtis was assigned to L Company 116th Infantry and transported with his unit to France. The unit sailed from Hoboken, New Jersey aboard the USS Finland on 15 June 1918.  He died on 19 Oct 1918 of wounds suffered on 12 Oct 1918. PVT Yeager was awarded the Distinguished Service Cross for his efforts in that fight.  The citation for that award best tells the story of his final hours and days.


Private Curtis L. Yeager (deceased) - Company, One Hundred and Sixteenth Infantry (A. S. No. 2003864). For extraordinary heroism in action near Verdun, France, Oct. 12, 1918, Private Yeager, in an exposed position, under heavy machine gun and artillery barrage, kept up an effective fire from his automatic rifle until severely wounded. After waiting seven hours with a comrade for a stretcher, and only one arriving, although practically unconscious, he insisted on his comrade leaving first.

PVT Yeager is buried in the Meuse-Argonne American Cemetery.