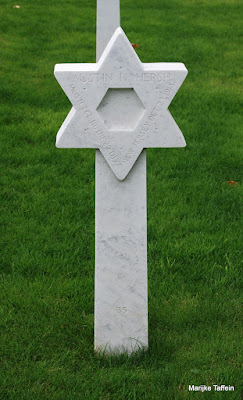 Musician 2nd Class Austin Herman Hersh was born 6 Jan 1892 in Elizabeth, New Jersey the 2nd of 4 sons born to Edward Simon and Lily G (Hackes) Hersh.  His father was born in Austria and owned a dry goods store in Elizabeth with his brother. Austin earned a Bachelor of Arts degree from Amherst College in 1916.

After entering the Army, Austin would be assigned to Headquarters and Headquarters Company 116th Infantry and travel with the unit to France, serving as the Regimental musician.  Musician Hersh was killed in action on 23 Oct 1918 when he was carrying hot food to a front line trench and a shell exploded in the kitchen killing a cook outright and injuring Hersh so badly that he died before he could be evacuated.