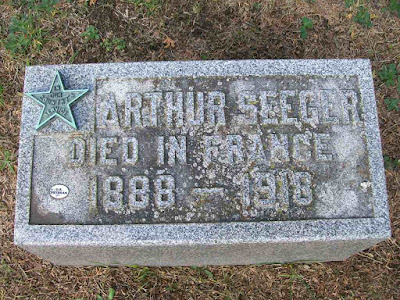 PVT Arthur Seeger was born in Greenleaf, Michigan on 30 Jan 1888 to Andrew and Mary Ann Seeger.  Andrew supported his family of 11 by farming.

Arthur was likely drafted and was assigned to C Company 116th Infantry.  He died of pneumonia on 24 Oct 1918.

He was born in Greenleaf Township on Jan. 21, 1886, and spent his entire life there until he entered the service on March 30. He sailed for France in July. The last letter received from him was dated Sept. 4. He had then been 16 days in the trenches and had had several close calls but was unharmed.

PVT Seeger is buried in Elkland Township Cemetery in Cass City, Michigan.
Posted by Hobie at 4:45 AM