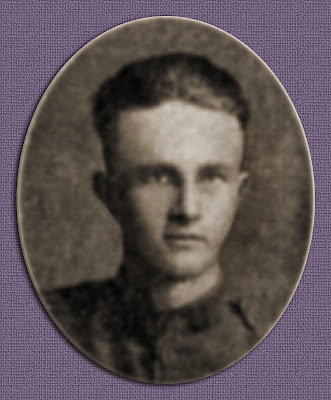 PFC Ollie Oliver Olive was born 20 Jan 1896 in Stafford County, Virginia. He was the oldest of 9 children born to Richard Andrew and Minnie Francis (Sullivan) Olive. Richard was a carpenter and the family also farmed.  Ollie worked the farm while his dad worked as a carpenter.

After entering the Army, Ollie was assigned to K Company 116th Infantry.  He sailed for France with the unit aboard the USS Finland in mid-June 1918.  PFC Olive was killed in action on 16 Oct 1918.

PFC Olive was repatriated in 1921 and re-interred in Arlington National Cemetery in Arlington, Virginia.

His cousins, Herbert and Hugh Jett, also of Stafford County, also served in K Company.
Posted by Hobie at 8:04 PM