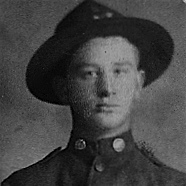 PFC Julian Doran Miller was born 7 Aug 1900 in Luray, Virginia.  He was the youngest of 6 children born to William Michael and Lucy Anna (Shenk) Miller. His father was a carpenter.

Julian enlisted in the 2nd Virginia Infantry prior to 7 Aug 1917 and went with that unit for training at Camp McClellan, Alabama. It was at Camp McClellan that the 2nd was reorganized and PVT Miller was assigned to Machine Gun Company 116th Infantry.  Julian sailed with the unit aboard the USS Finland to France.  The ship sailed from Hoboken, New Jersey on 15 Jun 1918 and arrived in the port of Saint Nazaire, France on 28 Jun 1918.  The whole 29th Division, of which the 116th was a part, took part in trench warfare training. The unit was part of a major offensive in the vicinity of Verdun that began on 8 Oct 1918. PFC Miller was killed in action on 17 Oct 1918.

PFC Miller was repatriated and re-interred in Beahm's Chapel Cemetery in Luray, Virginia.