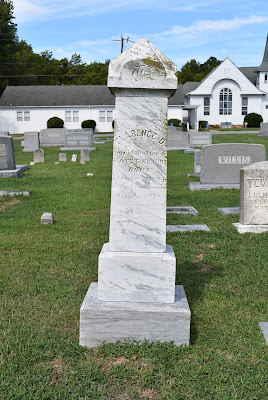 PVT Clarence D. Wilkins was born 20 Jun 1895 in Capeville, Virginia.  He was the 2nd of 6 children of Walter Daryl and Kathryn G. (Downes) Wilkins. His father was a sailor and then a produce wholesaler.

After entering the army, Clarence was assigned to Machine Gun Company 116th Infantry.  The unit departed Hoboken, New Jersey aboard the USS Finland on 15 Jun 1918 and arrived at the port of Saint Nazaire, France on 28 Jun 1918.  After training in trench warfare and a period of acclimatization in a "quiet" sector, the unit was part of a major offensive which began on 8 Oct 1918.  PVT Wilkins was killed in action on 17 Oct 1918.

PVT Wilkins was repatriated and re-interred in the Capeville Masonic Cemetery in Capeville, Virginia.

Brother, Walter Daryl Wilkins Jr. served as a CPL in A Company 54th Infantry in the war.
Posted by Hobie at 5:11 PM