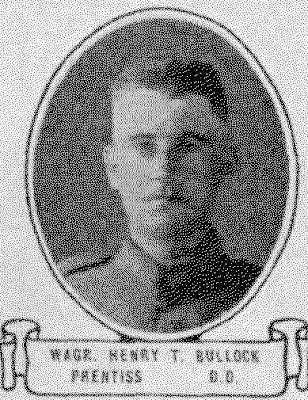 Wagoner Henry Thomas Bullock was born 20 Nov 1893 in Prentiss, Mississippi. He was the 6th of 10 children born to William Diamond and Hattie (Hall) Bullock. His father died 6 Dec 1899. The family supported themselves by farming rented land. Henry was farming when drafted.

Henry was drafted in April 1918 and initially sent to Camp Pike, Arkansas. Assigned to Supply Company 116th Infantry, Henry shipped out for France aboard the USS Finland on 15 Jun 1918. Wagoner Bullock served with and supported the regiment as it trained for trench warfare. Wagoner Bullock contracted pneumonia at some time, possibly as a complication of influenza, and died on 21 Oct 1918.

Wagoner Bullock was repatriated and re-interred in the Antioch Cemetery in Prentiss, Mississippi.
Posted by Hobie at 9:07 PM

Email ThisBlogThis!Share to TwitterShare to FacebookShare to Pinterest
Labels: Supply