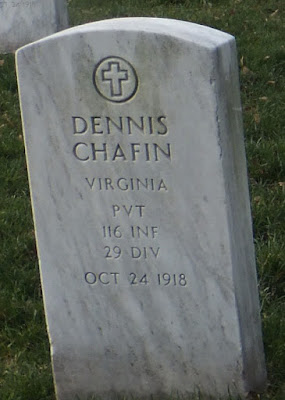 PVT Albert Dennis Chafin was born in April 1898 in Castlewood, Virginia the eldest of 11 children of Meredith Thomas and Jerusha Elizabeth (Fields) Chafin.  The family farmed.

Dennis (as he was known in the Army, he apparently never went by Albert or used that name in the service), enlisted in H Company 2nd Virginia Volunteer Infantry on 12 Jun 1917.  When the unit was mobilized for service in France and units were consolidated into new units, Dennis was assigned to G Company 116th Infantry.  He was with that unit when it left Hoboken, New Jersey on 15 Jun 1918 on the USS Finland destined for France.  PVT Chafin was killed in action on 24 Oct 1918.

PVT Chafin was repatriated and re-interred in Arlington National Cemetery in Arlington, Virginia.
Posted by Hobie at 4:45 PM