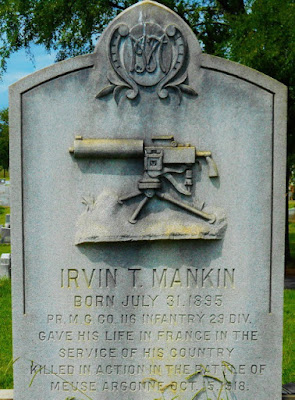 PVT Irvin Thurston Mankin was born 31 Jul 1895 in Hanover County, Virginia.  He was the oldest of 6 children born to Edward Thurston and Olive Branch (Jones) Mankin. His father was a carpenter and worked at a brick factory. Irvin worked as a bricklayer in 1915.

After entering the Army, Irvin was assigned to Machine Gun Company 116th Infantry.  He sailed for France with the unit aboard the USS Finland.  Departing Hoboken, New Jersey on 15 Jun 1918, the ship arrived in the port of Saint Nazaire, France on 28 Jun 1918. The unit then went through trench warfare training and acclimatization in a "quiet" sector of the front lines.  On 8 Oct 1918 the 29th Division including the 116th kicked off a major offensive in the vicinity of Verdun. PVT Mankin was killed in action on 15 Oct 1918.

PVT Mankin was repatriated and re-interred in Riverview Cemetery in Richmond, Virginia.

Maternal uncle, Arthur Creston Jones served as a CPT at the Richmond General Depot during the war. Brother, Edward Harmon Mankin, served in the U.S. Navy 1918-1919. Grandfather, Oscar Robert Mankin, served in H Company 17th Virginia Infantry until captured in the later half of 1864 when he was captured and sent to Fort Delaware.
Posted by Hobie at 6:15 PM