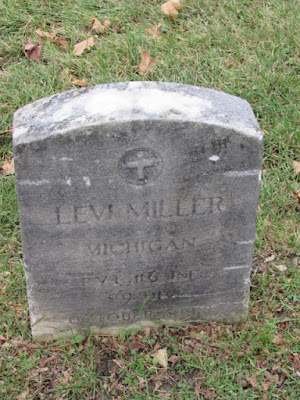 PVT Levi Miller was born 14 Sep 1887 in Kimball, Michigan to Thomas and Annie (Cowling) Miller, the youngest of their seven children.  His father was a native of England and his mother a native of Canada.  His parents apparently met and married in Canada where his oldest sister was born. The family farmed in St. Clair county, Michigan. Levi's father was 41-years old when he died just 3-months after Levi was born. His mother died in February 1895 when she was only 39-years old. Levi lived and farmed with his older brothers, George and John near Kimball, Michigan in 1900. However, by 1917, he was working for St. Clair County, Michigan on their road crew maintaining county roads.

Levi was not yet married when he was drafted in 1918.  Assigned to E Company 116th Infantry, he was with that unit when it embarked on the ship Finland for France in June 1918. His parents might both have already died because his sister, Lilly Mae Miller Auch, was listed as his next of kin on the ship manifest.  PVT Miller was killed in action on 15 October 1918.

PVT Miller's was repatriated and he was re-interred in Caswell Cemetery in Kimball, Michigan with his parents.