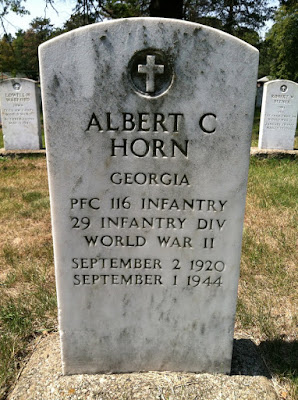 PFC Albert Charles Horn was born 2 Sep 1920 in Webster County, Iowa to George Washington and Florence Theresa (Jorden) Horn.  His father was a brakeman on the railroad. His mother died in 1934.  It was about this time that the family was living in Herman, South Dakota.

Albert had probably been in the South Dakota National Guard when he was drafted in October 1942.  On 18 Jun 1943, in Russell County, Alabama, Albert married Elizabeth Capps.  Sent overseas to Europe he was transferred from the replacement depot to G Company 116th Infantry on 25 Jul 1944. On 18 Aug 1944 Albert was promoted to PFC. PFC Horn was killed in action on 1 Sep 1944, the day before his 24th birthday.

PFC Horn was repatriated and is buried in Glendale Cemetery in Des Moines, Iowa.
Posted by Hobie at 5:53 PM