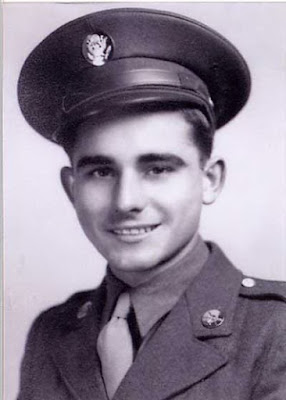 PFC Andrew Pereiro was born in Mera, Oleros, Coruna, Spain on 4 May 1923.  We don't know much about the family but they appear to have immigrated from Spain in 1939.  His mother was Laura Garcia de Pereiro and he had one brother, Juan Pereiro who also served.  Andrew was working for Taylor Photo Studio at 117 East 24th Street in New York City in June 1942. Both his mother and brother were naturalized in 1944.

Drafted in May 1943, he was ultimately transferred from the replacement depot to L Company 116th Infantry on 22 Jun 1944. PFC Periero was killed in action 1 Sep 1944 near La Trinite, France during the drive to liberate Brest.

PFC Pereiro is buried in the Brittany American Cemetery.