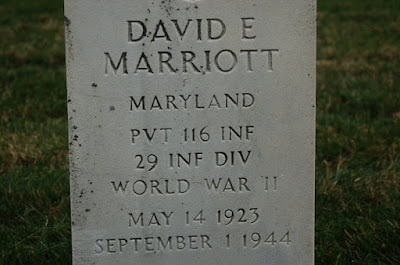 PVT David Edward Marriott was born 14 May 1923 in Baltimore, Maryland the youngest of 4 children of George Edward Carroll and Marcella M. (Holmes) Marriott. His father was a fireman.

David was drafted in February 1943.  Sent to England after basic training he was then sent to the replacement depot.  PVT Marriott was transferred from the replacement depot to F Company 116th Infantry on 19 Jun 1944 and wounded that same day and evacuated to hospital. He was returned to F Company on 9 Aug 1944 and fought with the unit until he was killed in action on 1 Sep 1944.

PVT Marriott was repatriated in 1948 and re-interred in Baltimore National Cemetery in Baltimore, Maryland.
Posted by Hobie at 8:33 PM