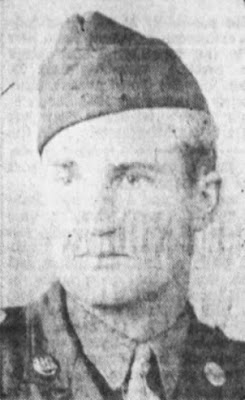 SSG Raymond Edward Painter was born 7 Oct 1920 in Nelson County, Virginia. He was the 2nd of 5 children and eldest son born to Alexander Thomas and Mattie Ann (Cash) Painter. the family farmed for many years near Riverheads, Virginia. His father rented their home for $10 per month and like many farmers recorded no income for 1939. Raymond was working on his farm.

Raymond enlisted in L Company 116th Infantry which was the National Guard unit in Staunton, Virginia on 31 Oct 1939. He was with the unit when it was federalized (mobilized) in February 1941. His mother died on 16 Jun 1941 while he and the unit were at Fort Meade, Maryland. He trained with the unit at Fort Meade, Camp A. P. Hill near Fredericksburg, Virginia, in maneuvers in North and South Carolina and at Camp Blanding, Florida. He was with the unit when it sailed for England aboard the Queen Mary in September 1942. He then trained for the invasion of occupied France with the unit. PFC Painter was wounded on 6 Jun 1944 and evacuated to hospital. He was returned to the unit from the replacement depot on 24 Jul 1944 and was promoted to SGT on 27 Jul 1944. He was again promoted, this time to SSG, on 18 Aug 1944. SSG Painter was killed in action in the attack on Brest on 1 Sep 1944. His brother-in-law, TSGT William Hyde Eutsler was also serving with L Company and wrote his wife, "... the news of Raymond (his promotion) was grand; wish I could say as much now."