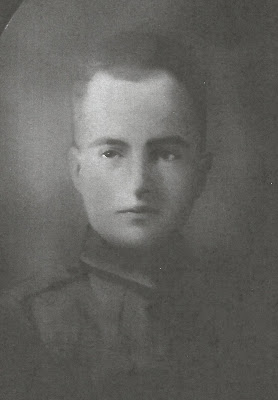 Raymond enlisted shortly after war was declared. After entering the service, Raymond went to Camp McClellan and was assigned to I Company 116th Infantry.  He trained with the unit at Camp McClellan, Alabama and then traveled with the unit aboard the USS Finland to France in June 1918. Raymond was wounded sometime between 8 and 15 Oct 1918 and died of his wound(s) on 16 Oct 1918.

Grandfather, William Jackson Shenk, served as a PVT in I Company 97th Virginia Militia in the Civil War.
Posted by Hobie at 3:26 AM