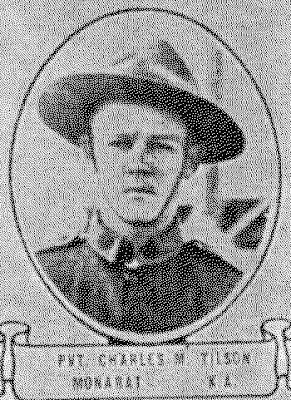 PVT Charles M. Tilson was born about March 1900 probably in Sulphur Springs, Virginia the youngest of 4 children born to Thomas Benton and Martha (Robinson) Tilson. His mother died soon after, probably about 1903.  His father remarried in 1904.  The family farmed.  One sister married, another was hired out as a house servant at age 15. His father took up mining. What happened to Charles at this time is unknown.

When Charles entered the Army he was living in Monarat, Virginia. We believe that Charles was first assigned to M Company 116th Infantry.  It was with that unit that he traveled aboard the USS Finland to France. Sometime after the Regiment arrived in France we think he was reassigned to G Company 116th Infantry. PVT Tilson was wounded and died of his wound(s) on 13 Oct 1918.

We do not know where PVT Tilson was buried but since his grave is not recorded in one of the overseas cemeteries and he is not listed on the tablets of the missing we think it likely that he was repatriated and is buried in Carroll or Grayson counties in Virginia.

NOTE: This soldier's life being one of the most difficult to sort out of any we've had.
Posted by Hobie at 10:27 AM