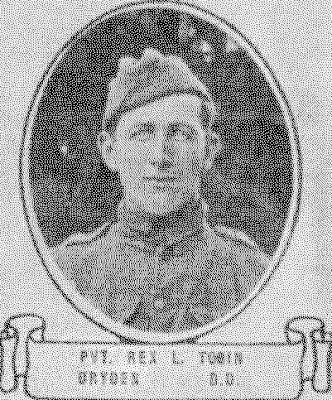 PVT Rex Lea Tobin was born 30 May 1896 in Carthage, Maine, the 5th of 6 children born to Herbert Llewellyn and Ada F. (Hammond) Tobin.  The family farmed.  In 1917, Rex was working in the Wilton Woolen Mill in Wilton, Maine.

Rex was drafted at Farmington, Maine on 1 May 1918 and assigned to Recruit Company 2 General Service Infantry at Fort Slocum, New York. On 7 May 1918 he was reassigned to Recruit Company 6 at  Camp McClellan , Alabama. On 22 May 1918 he was reassigned to Headquarters and Headquarters Company 116th Infantry. On 2 Jun 1917, Rex married Lillian Mirette Norlin. Just 13 days later he departed Hoboken, New Jersey with his unit aboard the USS Finland destined for France.  Rex died of pneumonia on 13 Oct 1918.

PVT Tobin was repatriated but we do not know where he was buried although it was likely with his parents somewhere in Franklin County, Maine. One sister would name her son for him and Rex Albert Horrock would serve in the US Navy in WWII.  His wife would remarry in 1919 and have a daughter with Rex's older brother Charles Herbert Tobin.