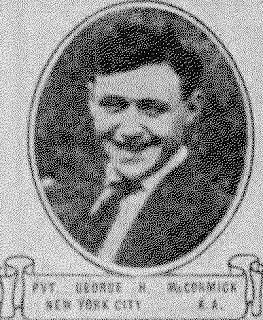 George was inducted on 4 May 1918. He was sent to Fort Slocum, New York and assigned to 5th Company 58th Recruit Brigade. On 20 May 1918 he was assigned to M Company 116th Infantry.  He was with the unit when it boarded the USS Finland at Hoboken, New Jersey and sailed for France on 15 Jun 1918. He went through the trench warfare training with the regiment.  PVT McCormick was killed in action on 12 Oct 1918.

PVT McCormick was repatriated and re-interred in the Cypress Hills National Cemetery in Brooklyn, New York.

George and Margaret had no children.  She did re-marry after the war.
Posted by Hobie at 11:10 AM